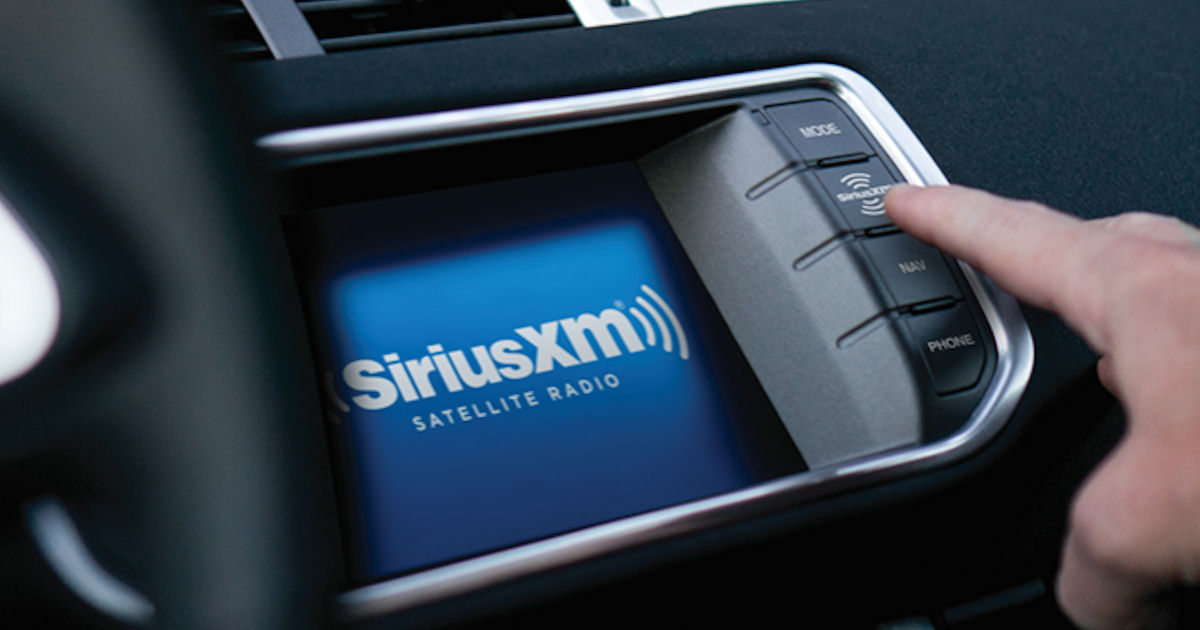 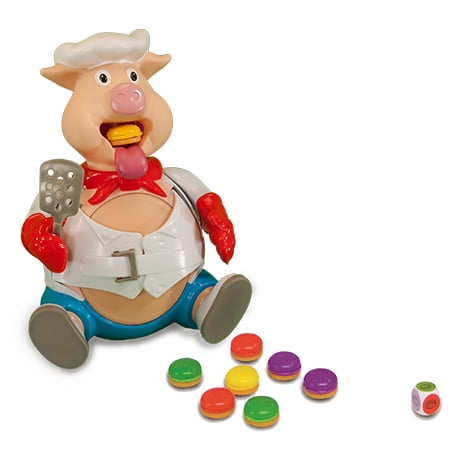 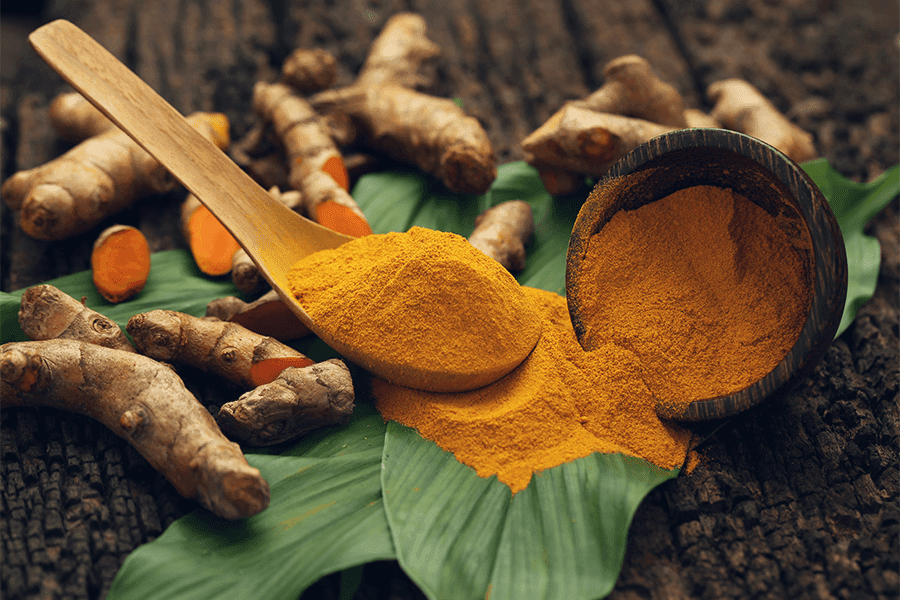 7 Easy Ways to Add Turmeric to your Routine 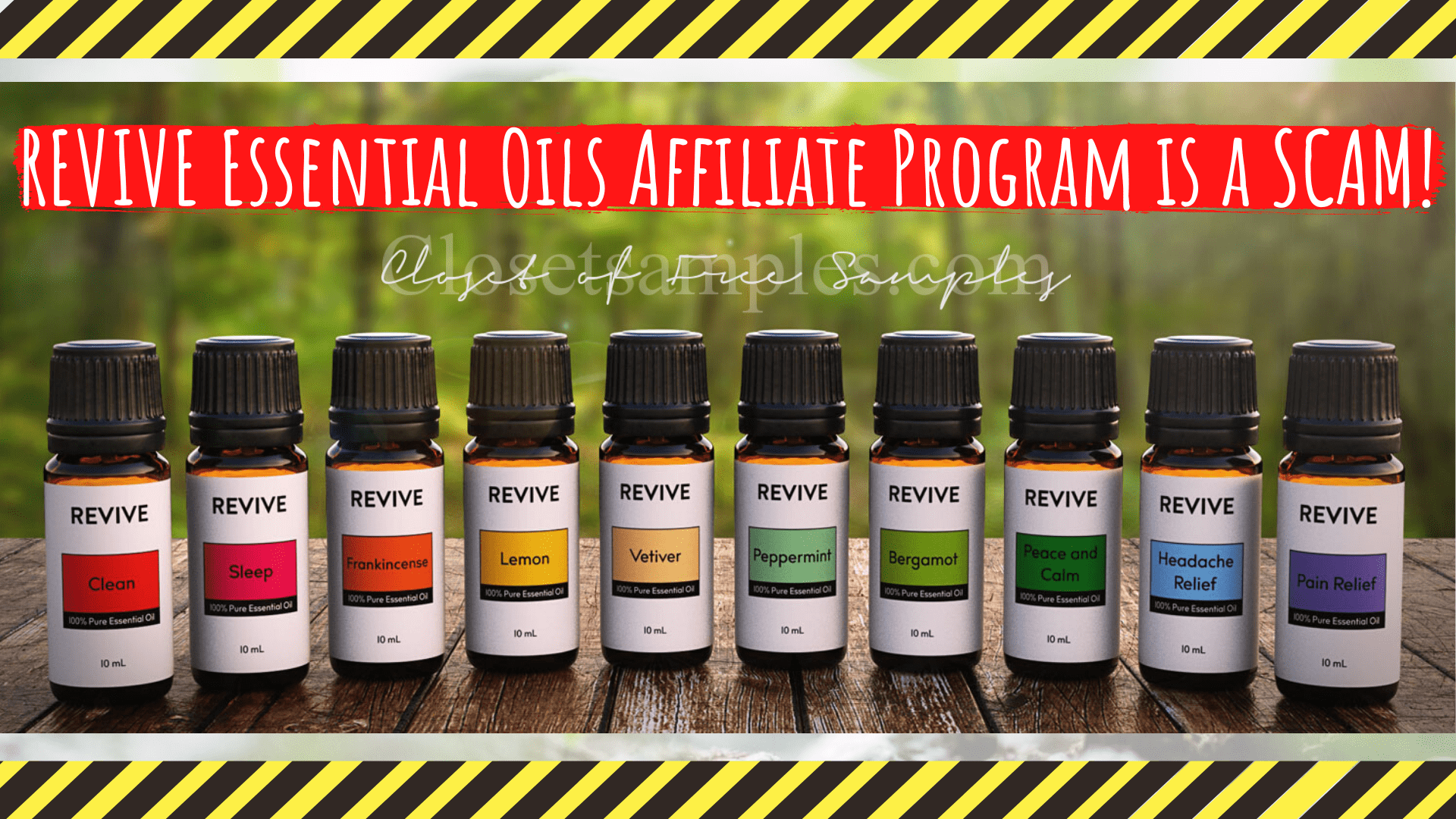 REVIVE has done the right thing and paid me what they owed as well as apologized!

So let me start off by saying I had fallen in love with the REVIVE brand of essential oils. I kept seeing the posts on Facebook comparing those to popular name brands such as Young Living and DoTerra and that they were cheaper. So I gave in, made an order and fell in love. I made some more orders and made a few social media mentions. Not only did I want to share my excitement, but I could get like a $10 coupon or something for anyone who used my code or link or whatever. I’m not sure what it was exactly anymore at this point.
Fast forward, around the end of January or the beginning of February, I was approached by REVIVE EO who thought I would be a great candidate for their referral program. Of course, I accepted! I mean, why not?! I loved the product so why not promote it and maybe make some extra cash with it. I was beyond excited and signed up.
Upon signing up I filled out my information in the dashboard and began looking around then started promoting. I had an exclusive code for 10% off to offer new users off their first purchase. I knew that would work great with my readers. I also submitted it to the only coupon code site I use, DealSpotr. Now, this site I use for influencer purposes 99% of the time these days (as in product reviews), however, I wanted to take advantage and put my code on there. After all, the REVIVE EO did NOT have any terms or conditions posted on their affiliate site nor were any actually sent to me.

Email screenshot of the original coupon code issue. As you can see it was an honest mistake due to not being any TOS posted, but it was resolved and REVIVE admits to APPROVING commissions - thus showing they manually approve commissions. So obviously they approved my commissions originally as they showed in my dashboard and come time to pay up they decided they didn't want to.
A short time later (about 2 weeks maybe) I received an email stating that was against their terms and my coupon code was changed. No big deal. I apologized and invalidated the code and only strictly promoted on my website and social media. I mean, I didn’t purposely violate the terms. I couldn’t possibly know if no terms had been sent.
Every day I would log in and saw my earnings were quickly increasing. I figured my posts were a hit and doing very well. Particularly an article I wrote comparing my experience with Young Living and REVIVE Lavender essential oils was my top post when it came to writing about REVIVE.

The first email received from REVIVE where they claim I violated their TOS (again, NONE are posted or were ever sent).
Well, come the time of payout, the day of, April 1st, I was notified that they would NOT be paying me for violating their terms! Say what?!? I had $800+ in cleared earnings! As in, someone goes in and manually approves these earnings. So why wasn’t that checked before they were approved? Well, here’s the thing, 1) I did NOT violate those terms and 2) Again, there are NO terms posted on their program or sent to affiliates. My new code, was NOT posted anywhere besides my own sites (which was approved by REVIVE). I, personally, did not submit, nor approve anyone else to submit my code to any other site or coupon site. Yet, REVIVE decided to treat me as such and reject my earnings. I submitted proof of all my posts to show I have been very active in promoting their brand. My posts show they have had hits on them. 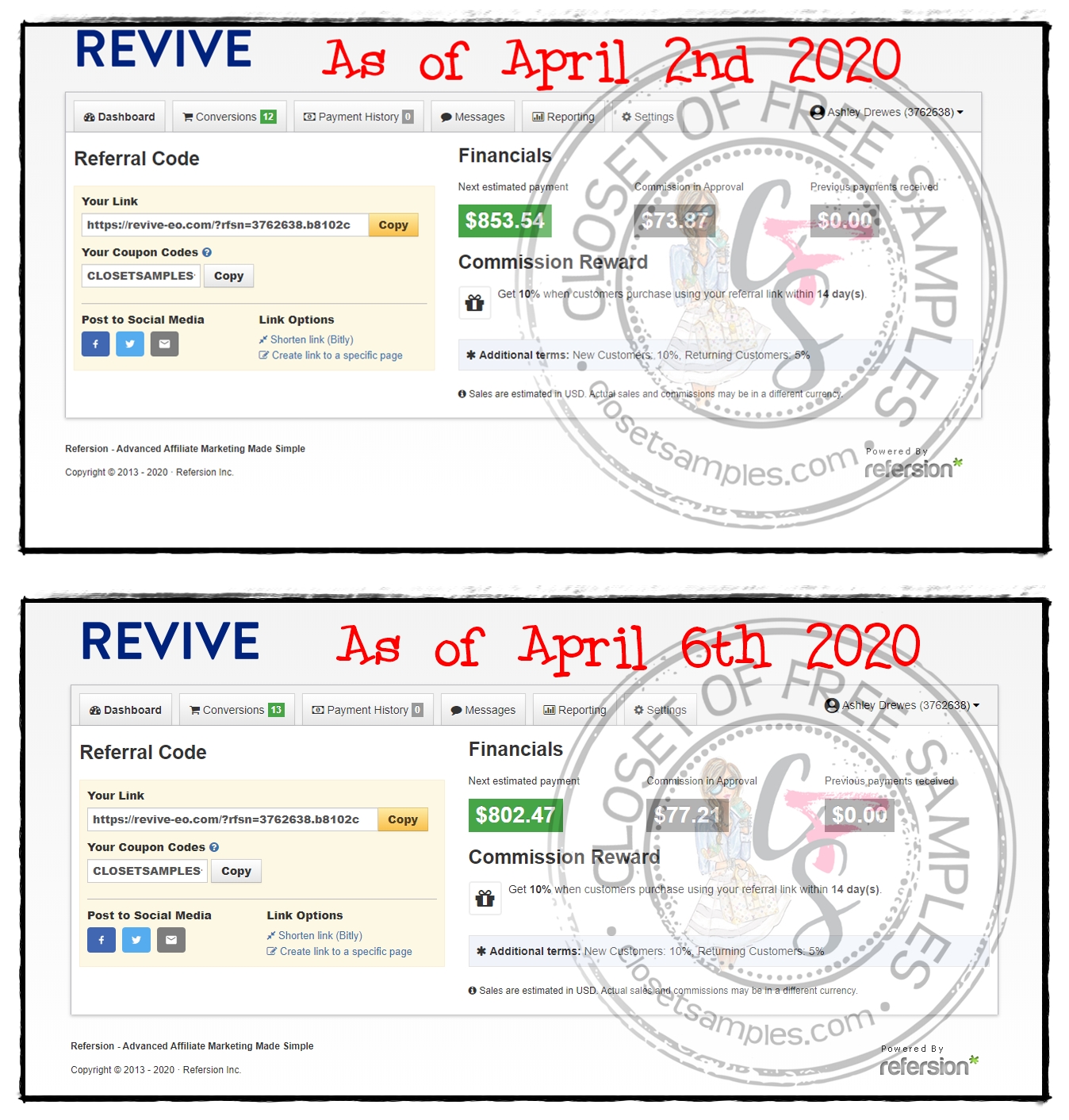 So what did they suggest? Only paying me $100 (which they are considering is ‘generous’ of them) and increase my affiliate commission amount for the month of April. Additionally, they want to give me a whole new link. To be quite honest, that’s a crap deal. Why would I want to continue to promote them when they won’t even pay me for what they owe me now? They should pay me what they approved and what they owe to me considering I had done nothing wrong. I suggested they just pay what they owe and remove the coupon code totally so it would just not be good and mentioned how people scour the internet to submit coupon codes. So if this was an issue now, something I didn’t even do, it will continue to be an issue in the future. Regardless if it is me or other affiliates. It’s the internet. Things are public. Unfortunately, that’s how it works. I have no control over what anyone else does, only over myself. Yet, I feel as if REVIVE is treating me like a criminal. I honestly feel like they are ripping me off and only wanted a free promotion. 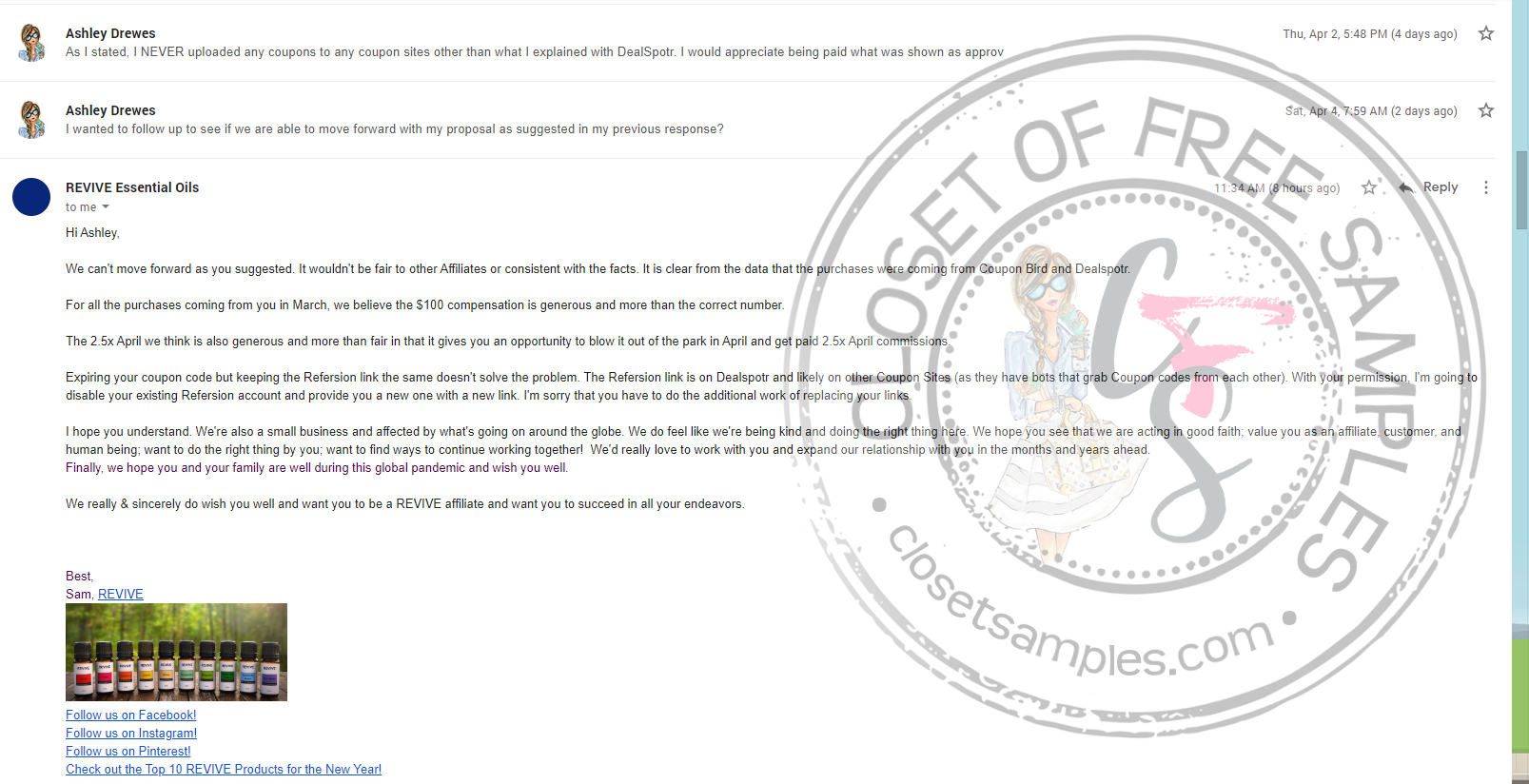 The "generous" offer from REVIVE to not pay me the full amount they owe me.
I have been trying to work with REVIVE Essential Oils on this for them to do the right thing and pay what is owed and even make suggestions to prevent this issue in the future. Unfortunately, they do not care about doing the right thing. What’s worse is the fact that they are doing this in the middle of the Corona Pandemic. So not only are they wrong in the business tactic, but they are morally wrong by hurting my family and myself personally.
After this experience, I can no longer recommend REVIVE Essential Oils or the REVIVE EO Affiliate program. While their oils are nice, I cannot support a company who could be so dishonest and greedy, particularly at a time like this. I am a very forgiving person and am willing to work with them if they so choose to have a change of heart and do the right thing.
I am truly heartbroken over this experience and hope no one else has to find out the hard way that they are not the company I thought they were.
On that note, I also want to apologize to my readers who have supported them because of me as I truly thought I was bringing you an honest company to do business with and it is clear that is no longer the case.
P.S. – They have sent $100 via PayPal so I’m requesting they pay the remaining $702 to make this right. 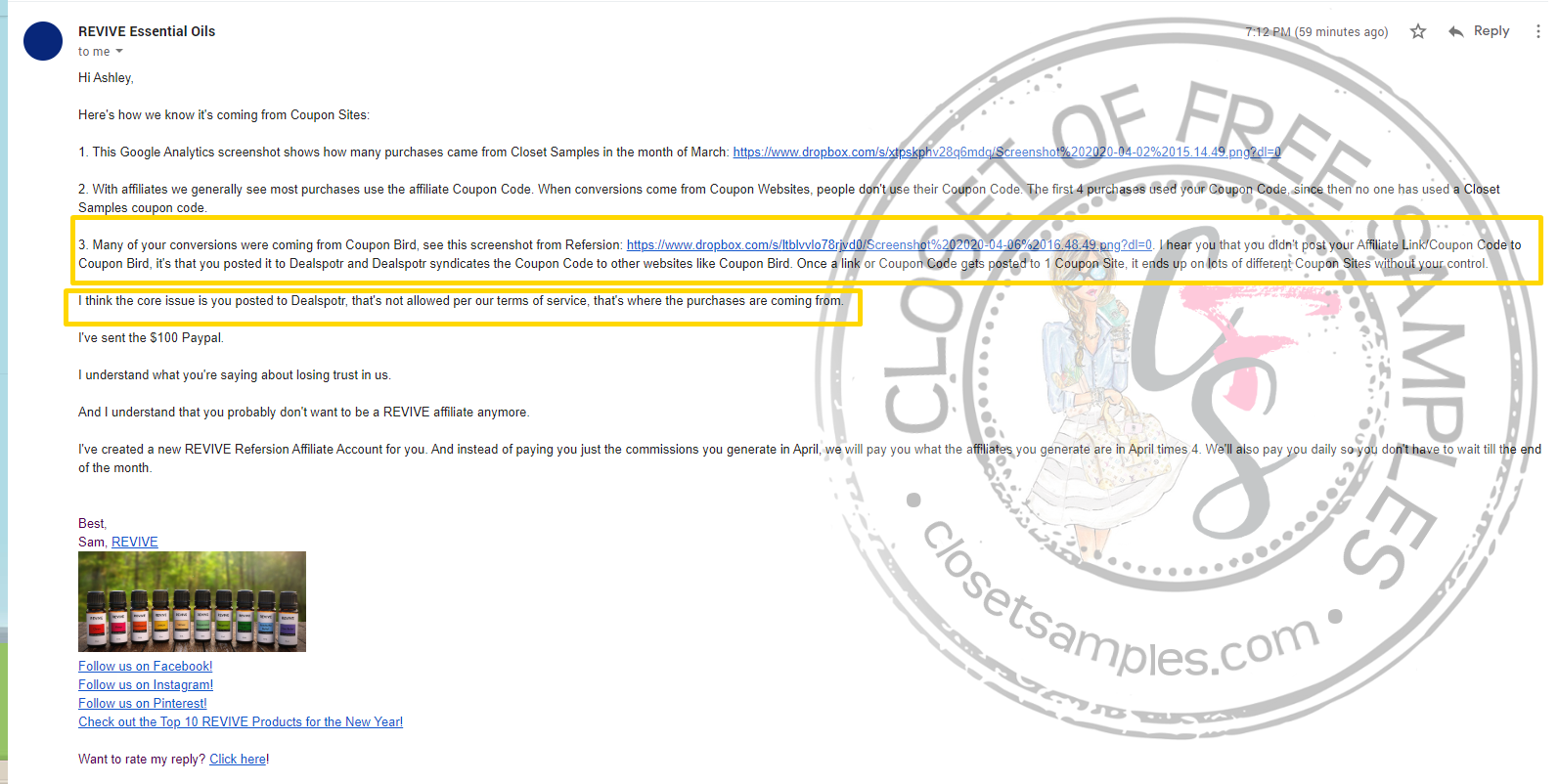 UPDATE 4/6/2020 8:21pm
This is the latest email from them where they, in round about terms, admit there is some type of issue that's not necessarily me, but still won't pay up. This was my response to that:

Again, I have been punished as if I did something. You continue to say "violating terms" when I was NEVER sent your terms nor is it listed on the affiliate website. So to hold me to your terms is not right since none were ever provided to me to begin with.
Also, on Dealspotr, I ONLY posted the ORIGINAL code (closetsamples) you gave me. NOT the new updated code (as I promoted everywhere else, Closetsamples10) and NOT my actual link as that goes against DealSpotr's terms. You had contacted me stating that was against the terms and changed my coupon code, which means that code was no longer valid and I would not get credit for it. That was based on what YOU told me.
Also, the commissions need to be manually approved, based on previous conversations. So that leaves me to question why were so many transactions even approved if they were not truly earned?
So once again, I have been unjustly treated. I did nothing wrong. I offered solutions. I feel as if I gave you a free promotion because I am not being paid yet I put forth so much effort.
I see where you say the information is on the other sites, but again, I did not post it. If the coupon code was expired, it should not have been applied to my account so the explanation given is not adding up.

The fact I have to play these games... it's disappointing. I truly loved REVIVE and would be forgiving if they could simply apologize and do the right thing. If I'm in the wrong, why offer to pay me higher commissions for April and pay me immediately instead of monthly? It's because I didn't do anything wrong and they know it. The one time I did wrong, was by total mistake, I admitted to it and it was due to no terms being given or in place on their website. That issue was rectified, as you can see in the email screenshot I added in the post. All was supposedly resolved. Clearly not. Now trying to say my link was placed on DealSpotr? No, sorry doesn't work that way. Just apologize and do the right thing! Don't be a greedy company that doesn't care about the individuals or families that you hurt!
**UPDATE** 4/7/2020 6:34am
I  woke up to an email of apology from REVIVE and the long of the short is they have agreed to pay me what is owed based on their mistake. I fully appreciate their apology and can respect a business when they admit their wrong doing. Thank you everyone who took a moment to read and show signs of support with this issue. Thank you REVIVE for doing the right thing. 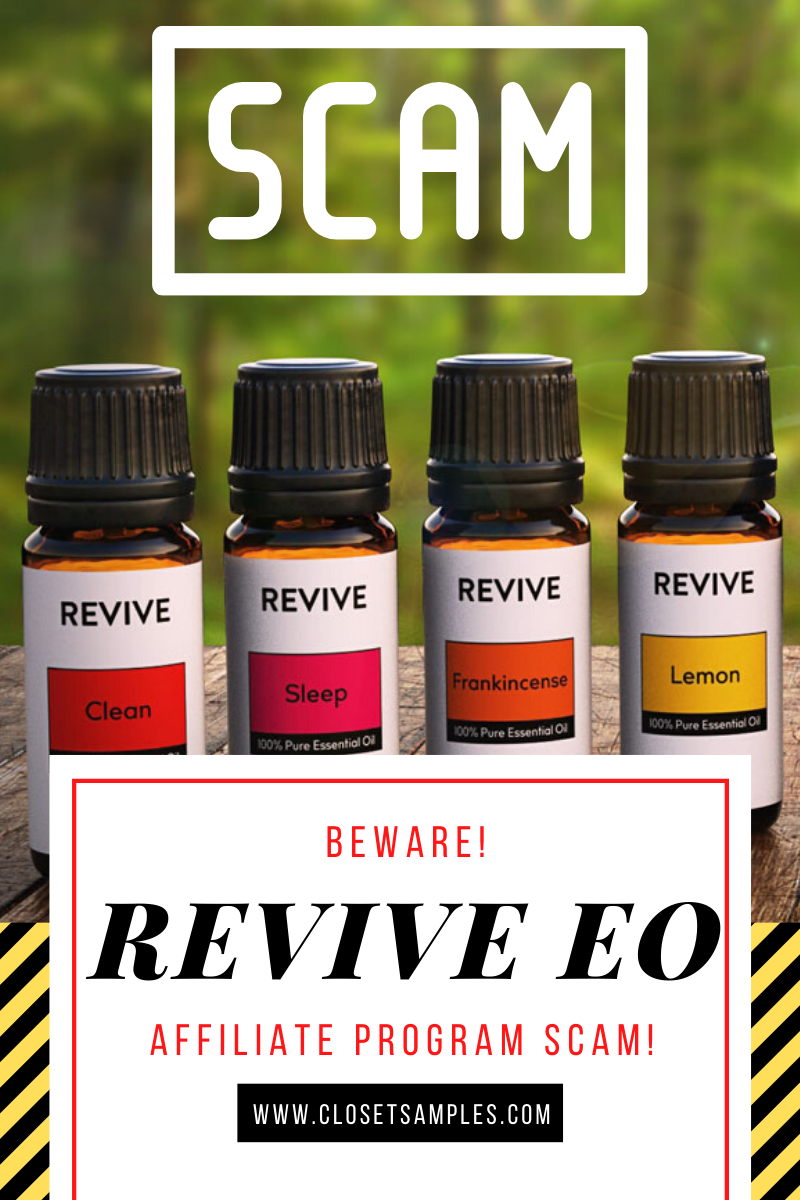 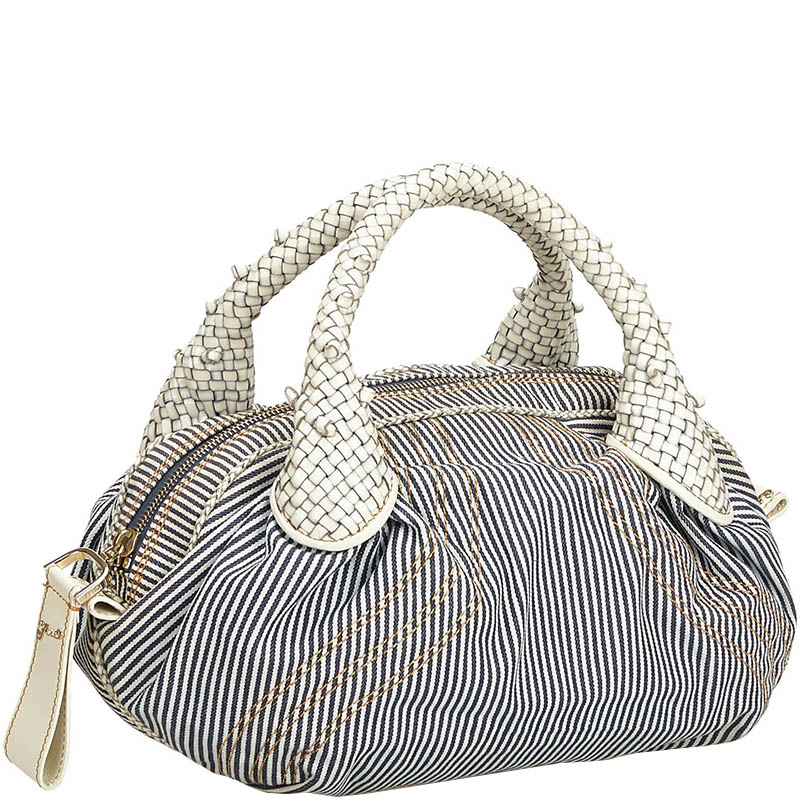 A new way of baking with OvenA... 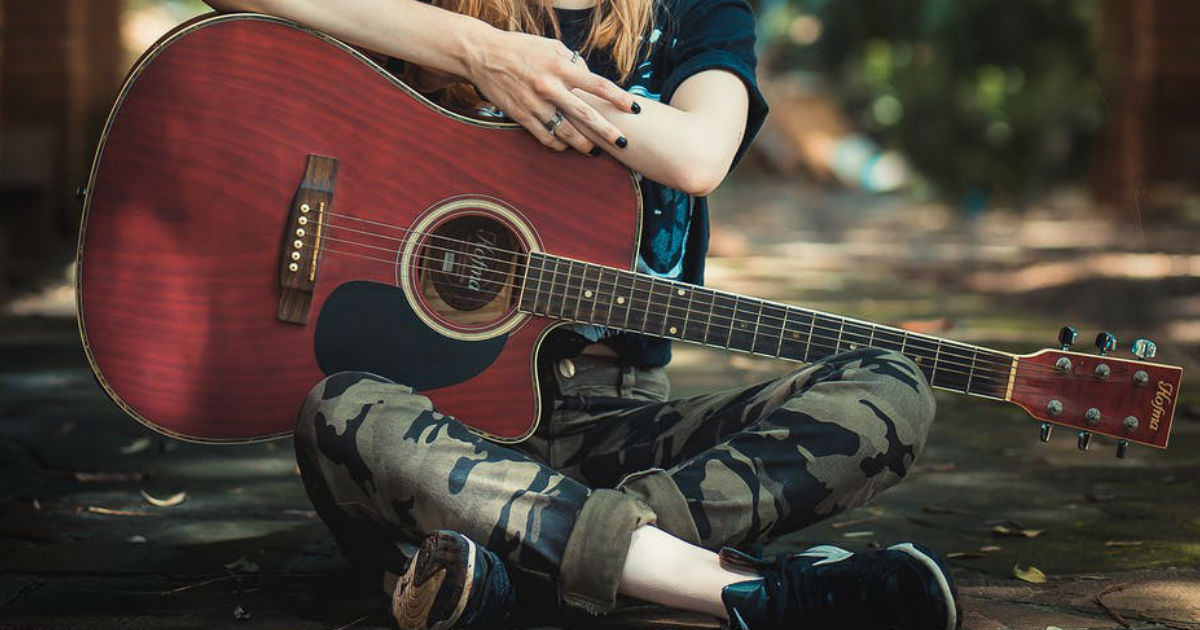 0 # Debz 2020-04-06 19:35
Wow! That's terrible to hear! I was looking into shopping with them after seeing all your reviews and posts, but definitely won't order now after what they have done to you. That is terrible! What a horrible company! I hope you get what they owe you. Such a shame, especially during everything going on right now! Wish you and your family the best.
Report to administrator
Refresh comments list